Managing people and birds in harmony at North Walney NNR

It is never easy for our nesting shorebirds to get on with their breeding attempts whilst our shores and beaches are so attractive to so many people who want to enjoy our beautiful coastline.

My first paid job working with the Lincolnshire Trust for Nature Conservation when I was 17 was to guard little terns nesting on the beach at Gibraltar Point near Skegness whilst living in an earwig-infested hut on the beach, (Oh, what happy memories).

Almost 40 years later and I’m still trying to protect and conserve nesting bird shorebird populations, but this time on North Walney NNR (unfortunately not little terns but ringed plover and oystercatcher). In-between this period I was lucky enough to be the warden on the RSPB Coquet Island reserve in 1989 where I was looking after the very rare roseate tern. Certainly, nesting two miles off the Northumberland coast on an island with strictly no visiting public does help to allow shore birds to nest in peace!

After all this time, many of the problems shorebirds face are the same - if not worse. There is, however, a conflict of interest here; on one hand we want to protect our wildlife, but we're also keen to make nature more accessible and attract more people out to enjoy the natural landscape and beauty of our nature reserves. More often than not, though, the wildlife suffers as a result of public access and this is where careful visitor management of our nature reserves is essential. 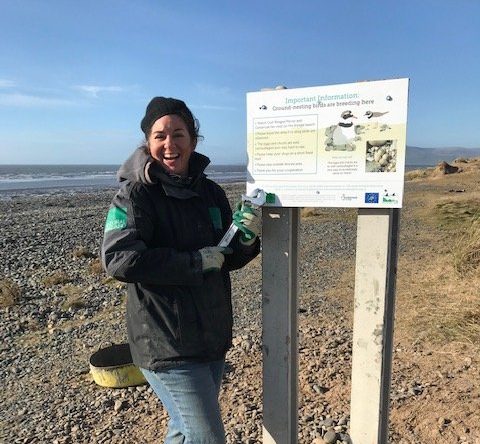 North Walney NNR is a very challenging site to manage; there are many conflicting issues when it comes to enjoying the site responsibly, none more so than dogs that can cause damage when off leads and not under close control. With Dynamic Dunescapes, we designed an engaging sign with illustrations and images to address the issue, and share the reasons why we ask for dogs to be kept under control - involving dog owners in the discussion and allowing them to help our conservation work. A total of six signs have been erected along the shore at strategic locations where ringed plover have tried to nest in the past. So, time will tell if pinged plover have more success this year.

The signs will be a good focal point when talking to the public and will make things easier for people to appreciate how sensitive the nests are to disturbance.

Why stop there? With a bit of research, time in the workshop building the thing and several drafts of the risk assessments later, a tern nesting raft was finally launched in a suitable pond at North Walney in May 2021. The raft measures 16’x 8’ so room for a few terns! A chicken wire fence surrounds the raft to prevent the gregarious feral greylag geese from taking over.

The first picture shows the raft with gravel covering the top and a couple of home-made anchors ready to be launched by our faithful contractor, Mike Ward. Mike is a qualified member of a local flood-rescue team so has all the necessary skills and equipment for the job. So after several failed attempts and the wind pushing the raft back, a MK 2  paddle was knocked together with a bit of spare wood and he ‘paddled’ out on the raft. The NNR staff remained on the bank with dry feet looking on in amusement! Anchors away and, after jumping in, Mike was pulled back ashore. Job done!

Although a common tern (or two, or more) would be nice, I’d be delighted even if a ringed plover decided to set up home on the raft and nest without being disturbed.

Click here to find out more about our work in Cumbria.