As spring arrives in Lincolnshire, Saltfleetby-Theddlethorpe NNR welcomes in some new avian arrivals and waves goodbye to some of the species which have been using the NNR to overwinter safely. Join our regular Lincolnshire bird blogger Cliff Morrison to find out which of our feathered friends have been coming and going in the last few weeks.

Pink-footed geese is an autumn and early spring spectacle as they passed through to their main wintering areas in Norfolk and back again. However, from around 2014, there was a small flock which began to roost here on the outer beach as breeding numbers in Iceland gradually increased. Since then, numbers wintering here have increased substantially, with over 5,000 being present in the early winter, feeding particularly on the grant-aided Higher Level Stewardship coastal grazing fields to the west of Rimac.

Most of these birds have now departed, but over the past couple of weeks, typically about an hour after dawn, flocks of several hundred geese per day have been flying northwards over the beach and sea. These have always been an early indicator that spring is arriving. It is thought that the geese move westwards up the Humber to the coastal grasslands of Lancashire, particularly around Martin Mere Wildlife and Wetlands reserve, where they spend several weeks before heading back to their breeding grounds when the first grasses begin to grow in mid-April. 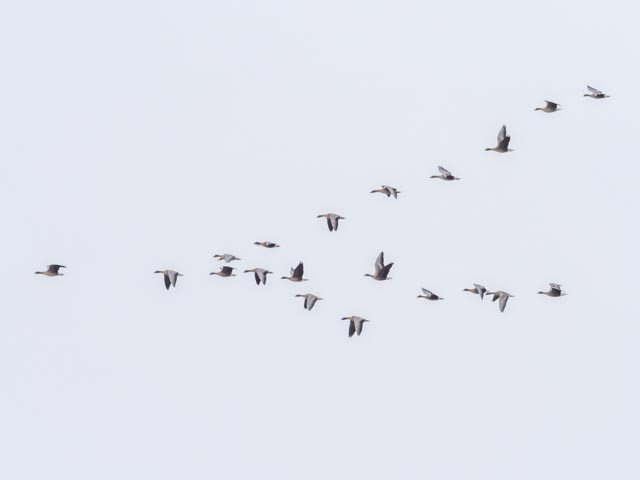 Pink-footed geese flighting north from wintering grounds in Norfolk, passing through about one hour after they depart at dawn. Most of the local wintering flock in the Rimac area depart by the end of February.

Up to 2,000 starlings have also been conspicuous recently in the Rimac area, with smaller flocks further south down to the grasslands at Mablethorpe North End. These will be birds that have wintered further west and will shortly be heading back to Scandinavia and Eastern Europe to breed.

Whilst conspicuous autumn arrivals of thrushes, particularly blackbirds and redwings are to be seen on the coast in autumn, their return to similar breeding areas to the starlings in spring is a much less visual affair. Blackbirds are a sparce, but widely spread breeding bird on the reserve, with the first males coming into song and establishing territories in the past couple of weeks. Most of the blackbirds to be seen are onward migrants, however.

Males can begin to depart from early February, with the females delaying until March/April. At two feeding sites next to the reserve, over 30 blackbirds can often be seen together. Whilst there are typically more females, the proportion of males drops rapidly to as low as 1 in 10 as early spring progresses. It can be a deadly gamble for early returning males to their breeding grounds, particularly when ‘beast from the east’ cold spells set in, but the advantages are that they can establish prime breeding territories.

Male and female blackbirds, where males leave for breeding grounds in Scandinavia and Europe ahead of females. Photos Owen Beaumont and Cliff Morrison

Whilst birds are leaving, early summer migrants are also returning, with the first chiffchaffs being noted in the last few days, along with meadow pipits, which have even been singing and establishing territories in the open dune and coastal marsh area. Both of these species have small over-wintering populations, but their main wintering grounds are in the Mediterranean areas of Europe and Africa.

Of recent note have also been 2 white wagtails migrating through northwards on 25th February and a woodlark (a particularly uncommon bird here) from 5th to 8th March.

This website uses cookies to improve your experience while you navigate through the website. Some are essential for the working of basic functionalities of the website, some are third-party cookies that help us analyse and understand how you use this website. These cookies will be stored in your browser with your consent. You can learn how to manage cookies on your web browser by following the Browser Cookies Guide (https://privacypolicies.com/blog/browser-cookies-guide/).
Necessary Always Enabled
Necessary cookies are absolutely essential for the website to function properly. This category only includes cookies that ensures basic functionalities and security features of the website.
Others
Other uncategorized cookies are those that are being analyzed and have not been classified into a category as yet.
Advertisement
Advertisement cookies are used to provide visitors with relevant ads and marketing campaigns. These cookies track visitors across websites and collect information to provide customized ads.
Analytics
Analytical cookies are used to understand how visitors interact with the website. These cookies help provide information on metrics the number of visitors, bounce rate, traffic source, etc.
Performance
Performance cookies are used to understand and analyze the key performance indexes of the website which helps in delivering a better user experience for the visitors.
Save & Accept
Powered by